The Darwin Awards is a time-honored way to laugh at people who stupidly risk life and limb in the dumbest ways possible. Since its formal creation in 1993, the website has chronicled ridiculous deaths and injuries from around the world, and a book series was also launched in 2000. In 2006, a Hollywood comedy, The Darwin Awards, starring Joseph Fiennes and Winona Ryder, was even made based on the honors.

What’s most interesting about the Darwin Awards to us, though, is that although “winners” are often various flavors of idiot, some have been highly qualified and supposedly intelligent members of society. Yes, philosophers, scientists and postgraduate students have all received this medal of dishonor.

Image SourceIf this list shows us anything, it’s that even people who should have some common sense often don’t. Notwithstanding the fact that you’ve got a master’s degree or equivalent, it doesn’t mean immunity. Read on for the most educated people to win Darwin Awards.

Many people have taken their father’s car for a spin and had a few nerve-wracking close calls – but at least they did it on the ground. On October 14, 2004, pilot Jesse Rhodes (pictured) and co-pilot Peter Cesarz were flying a passengerless, 50-seat Bombardier CRJ-200 from Little Rock, Arkansas to Minneapolis-Saint Paul when they decided to join the “410 Club” (but ended up winning Darwin Awards).

The “410 Club” is an elite, off-the-record group of daredevil (or stupid) pilots who have pushed CRJs to their 41,000-feet limit. Exceeding speed recommendations and performing various “unconventional” maneuvers on their way up, the Gulfstream Academy-trained pilots induced a stall warning and overworked the airplane’s engines. The doomed duo also miscalculated their autopilot setting, and fun and laughter soon turned to panic as both engines failed.

Even then, if the pilots had let air traffic control know the severity of their situation, they might have been able to glide to one of several nearby airports. Instead, the plane crash-landed two and half miles from Jefferson City Memorial Airport, killing both men. “It’s beyond belief that a professional air crew would act in that manner,” remarked a former Pinnacle training manager.

Garry Hoy was a respected Toronto lawyer and philanthropist, but sadly he is now mostly remembered for his embarrassing death. While attending a reception for new articling students, Hoy decided to demonstrate the strength of the boardroom’s “unbreakable” windows by throwing himself against them. Unfortunately, they proved less indestructible than advertised and the lawyer plunged 24 stories into the courtyard below.

According to witnesses, Hoy would often do this stunt to impress visitors but would normally bounce harmlessly off the glass. Indeed, tempting fate, he had already performed the trick once during the reception before making his ill-fated second attempt.

Hoy falls into the category of people who should have known better. He was a well-educated postgraduate and a former professional engineer. As such, he should have realized that the “unbreakable” claim was not literally true.

Dr. Erich Ritter is a Swiss shark expert with a doctorate and countless hours of experience swimming with the fearsome creatures. However, in 2002 he was filming a Discovery Channel documentary with bull sharks when he bit off more than he could chew.

In order to observe a feeding frenzy at close range and test his theory that sharks would not attack a human being that could control his breathing, body language and heartbeat, Ritter waded into the ocean with only his yoga techniques to protect him. While he was in the water, his assistants proceeded to throw chunks of fish into the bloody, murky water around him. The likely outcome was obvious to everyone except Dr. Ritter.

Next, a parasitic remora fish darted between the shark expert’s legs. Pursuing it, a bull shark clumsily bit off a big chunk of Ritter’s calf. He was immediately airlifted to a Florida medical center, where specialists managed to save his leg. (There’s no record of whether or not the remora was injured.)

Ritter recovered successfully, with only a disfiguring scar on his lower leg as a memento, and blames poor visibility in the water for the accident.

Some highly educated people have very strange family values. Dr. Jack Barnes was an Australian medical doctor and researcher studying the potentially fatal Irukandji syndrome. It was strongly suspected that a species of jellyfish was causing the condition, but nobody knew which one.

After weeks of patient underwater expeditions, Barnes identified the species he thought was responsible. But how could he be sure that he had found the culprit? In a perfectly logical manner, the scientist decided that the best way to find out was to sting himself, his nine-year-old-son, and a local lifeguard.

Soon after the experiment, Barnes, his unfortunate offspring and the lifesaver all developed muscle spasms, began vomiting, and exhibited “board-like” abdominal muscles. They were rushed to hospital, where they suffered from 24-hour headaches. Barnes, at least, had the satisfaction of knowing that he’d found the cause of the condition; it’s just a shame he had to risk the life of his child to do it. 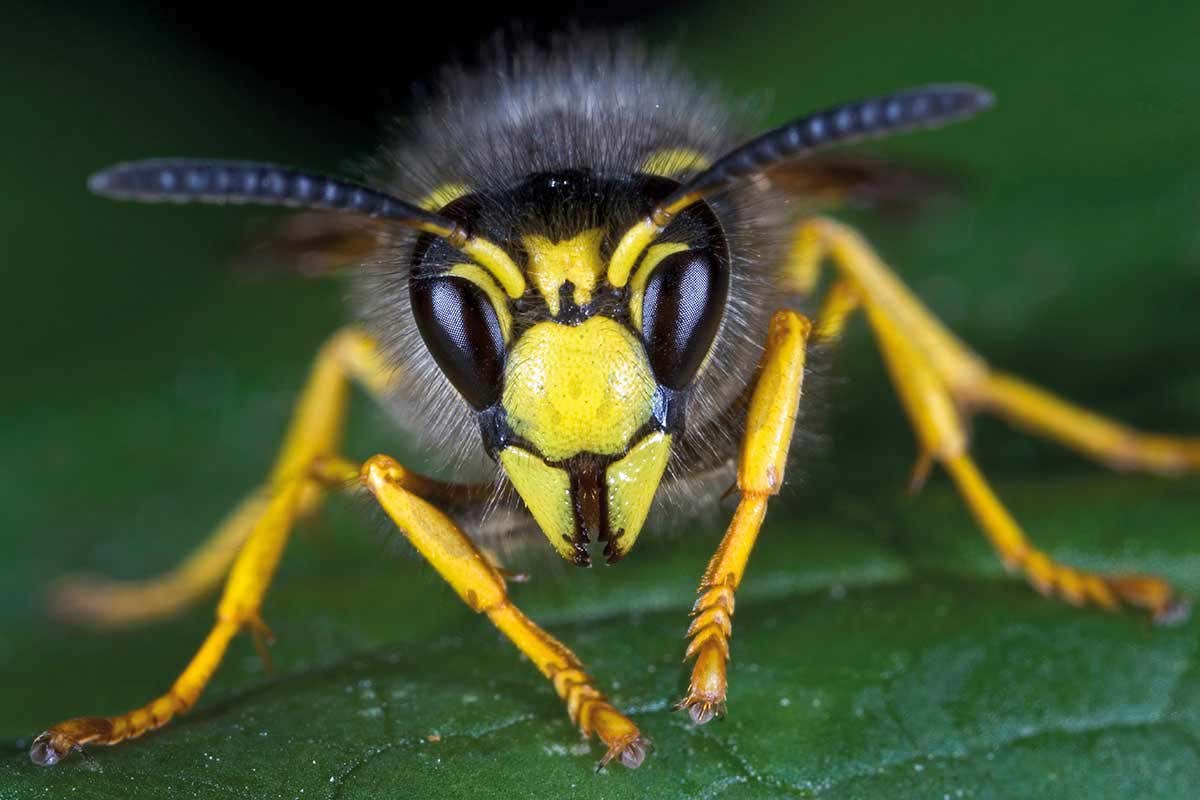 This Darwin Awards honorable mention clearly doesn’t have a way with animals. While working in a geology lab, a scientist named James was bothered by a wasp nest. Ingeniously, he decided that the best thing for it was the powerful suction of his Dirt Devil vacuum cleaner. Once all of the wasps were safely inside, however, James was faced with the problem of killing the pesky insects without letting them out.

What happened next just goes to show you that there’s a world of difference between “book smarts” and common sense. The scientist took hold of his trusty can of Raid and sprayed it down the nozzle of the vacuum cleaner.

Unfortunately, vacuum cleaners generate heat, and the Dirt Devil ignited the flammable aerosol, burning off James’s facial hair and bursting the dust bag open. The hapless scientist then suffered a barrage of stings from the furious wasps that had survived the explosion.

Astronomers need to have a good understanding of the universe. Sadly, some of these highly qualified individuals are still absentminded enough to forget really basic facts. Award-winning astronomer Marc Aaronson, Ph.D., was working late at night on April 30, 1987, at the Kitt Peak National Observatory in Tucson, Arizona, when he won an award he’d probably sooner not have claimed.

In order to ensure that the sky was clear enough of clouds for accurate viewing, the astronomer periodically stuck his head out of a hatch at the top of the dome. Bear in mind that the one golden rule at the observatory was that you shouldn’t check outside the dome when the telescope is in motion. However, in his eagerness to get a good view, Aaronson disregarded this directive.

Fortunately, the designers at the Kitt Peak Observatory had idiot-proofed the telescope by making it shut down when someone opened the hatch. Unfortunately, the dome’s momentum meant that it kept turning for a few seconds after being switched off. So it was that the access ladder on the side of the dome collided with the hatch, causing it to crush the unfortunate scientist.

Being a university professor can be thirsty work, but that doesn’t mean you can just glug away on anything you find lying around in the lab. Sadly, Professor Alexander Zhankov just couldn’t wait and died after accidentally quaffing poisonous methanol in 2001.

The Russian professor was working at Oxford University’s Hydrology and Ecology Centre, where he shocked colleagues by drinking laboratory ethanol. However, Zhankov was shortsighted, and it wasn’t long before he made a mistake and drank a beaker of methanol instead. Methanol is five times as toxic as ethanol but only one fifth as intoxicating. The result, for the professor, was a slow, lingering death on a life support machine.

Since Zhankov had joined the department, their rate of ethanol use had greatly increased due to the professor’s guzzling. His co-workers raised some concerns about his behavior, but he waved them off, claiming this was a common practice in Russia.

Amazingly, the quaffing professor’s last words before drinking from the beaker were, “We’ll soon find out if I’m a scientist or not.” Like they say, mixing your drinks is not a good idea.

Louis Dethy was a senior citizen with a grudge. His wife divorced him, he believed his kids and grandchildren had abandoned him, and his mother bequeathed the house that he had built to one of his daughters. Dethy was incredibly dangerous. He was also a highly qualified retired engineer with a penchant for booby traps.

In a whirl of diabolical creativity, 79-year-old Dethy transformed his home into a death trap. He used nylon fishing wire to rig up 19 concealed shotguns to common household items such as stacks of plates, chests, and crates of beer. Unbelievably, the bitter old man intended to kill or maim his family when they came to claim the house that he believed was rightfully his.

However, poor memory may have been Dethy’s undoing. The Belgian engineer accidentally triggered one of his own traps and fired a shotgun blast into his neck, causing him to bleed to death.

Police officers who found the man assumed that he had committed suicide, and they only discovered the truth when a detective was nearly killed opening a wooden chest. It took authorities three weeks to decode the insane engineer’s clues and find the rest of the booby traps. And if you’ve seen any of the Saw films, you’ll appreciate the media’s reference when they labeled him a “real-life Jigsaw.”

The “spirited and intelligent” Fellman was eager to try out The Raven, reputedly one of the most terrifying roller coasters in the world. The student was strapped into her seat at the rear of the car but apparently unbuckled herself to stand during the ride, a practice known as “catching airtime.”

Witnesses reported that Fellman was “virtually standing up” in the roller coaster car. Sadly, the student caught a little too much air during the coaster’s fifth turn and plummeted 69 feet to the ground. Fellman was pronounced dead on her way to the hospital.

Like we said, if the Darwin Awards proves anything, it’s that even the most intelligent people can remove themselves from the gene pool in seemingly ridiculous ways. Sir Francis Bacon was a noted 16th- and 17th-century philosopher and writer, famous for pioneering an early form of scientific method.

While traveling by coach outside London, Bacon suddenly hit upon the idea of using low temperatures, instead of salt, to preserve meat. However, being impatient, he decided to experiment by buying a chicken and stuffing it full of snow right there on the spot.

Obviously, Bacon’s supposition was correct, and keeping food cold can prevent it from going bad. Unfortunately, the great thinker didn’t survive the experiment. He caught a fatal case of pneumonia from his time spent outside in the cold.

Bonus: My father, the PhD – Anonymous

This Darwin Award was submitted anonymously, and we think it’s pretty obvious why. The entry chronicles the amusing mishaps of a Ph.D. who seems to lack the slightest bit of common sense.

Amongst his exploits are climbing a ladder with a running chainsaw; rolling a lawn tractor over himself while trying to mow a ditch at a steep angle; and swallowing three old nitroglycerin capsules at once to see if they still worked, resulting in him passing out at the kitchen table.

His hilarious clumsiness has, at times, endangered his whole family. While fishing, this “Renaissance man” of accidents managed to overturn the boat, nearly drowning both himself and his young son. He also managed to start at least two household fires by neglecting to take care of them. So in summary, sometimes father doesn’t know best.

Next Post: The 50 Most Amazing University Libraries in the World