The monetary value of having a degree can be seen by examining the results of a powerful new Pew Research Center survey of 2,002 young adults, supplemented by a Pew Research analysis of economic data from the U.S. Census Bureau. 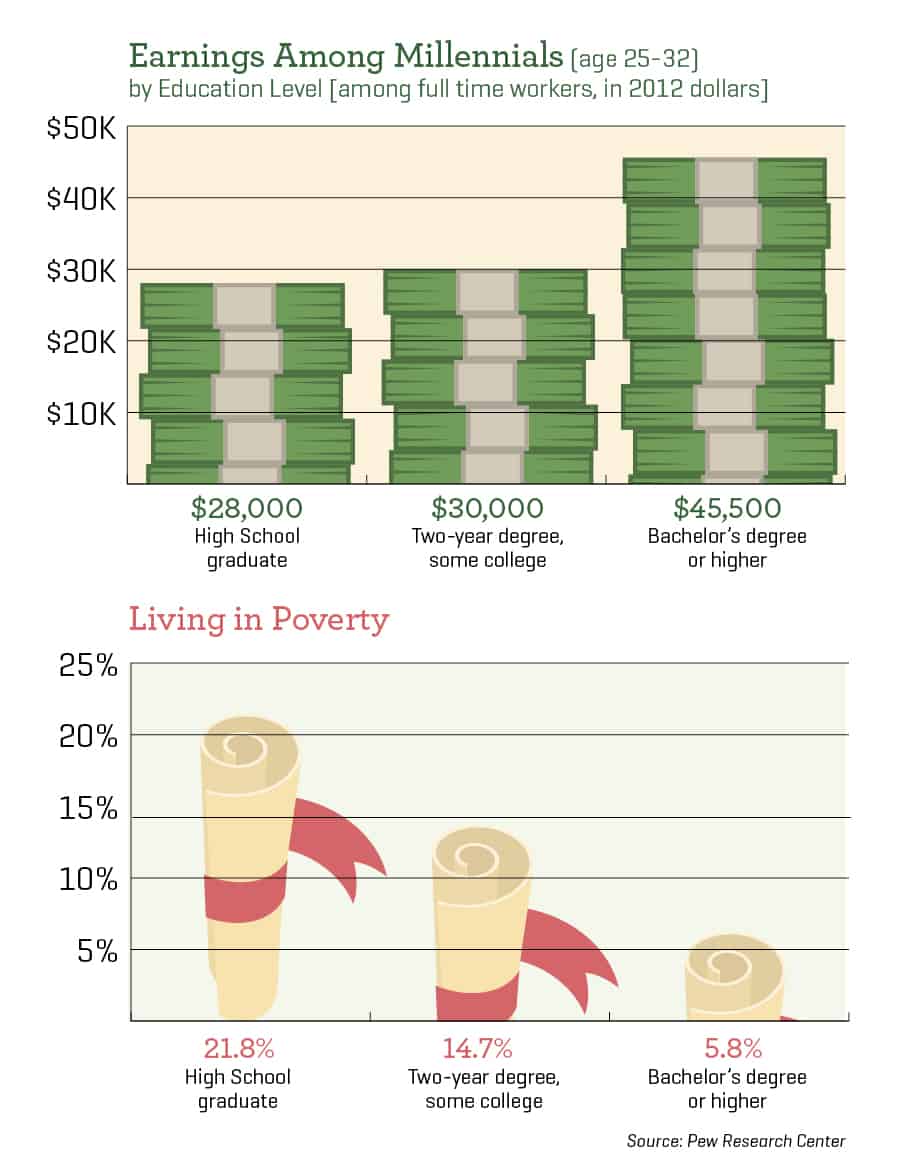 In addition, results from the Pew Research report found that not only does a college degree typically yield much more inflation-adjusted earnings than before, but a high-school diploma also is now almost worthless. That adds to a widening earnings gap that Pew researchers found mirrors the U.S. gap between rich and poor.

It was the realization by millions of post World War II men and women, including soldiers returning home from the front — that you need a college degree to get a good job — that eventually led to a stampede through college and university gates. This is when a post secondary education morphed from being an exception into the norm. Now, there is a virtual glut of young people entering the work force with bachelor’s degrees.

Listen to these facts: In 1950, some 34 percent of adults had completed high school; today, more than 30 percent have completed a bachelor’s. In 2010, colleges and universities handed out more than 1.7 million bachelor’s degrees, a number the National Center for Education Statistics (NCES) expects will grow to almost 2 million by 2020.

Increases in the traditional college-age population and rising enrollment rates have contributed to the increase in college enrollment. Between 2000 and 2011, the 18- to 24-year-old population rose from approximately 27.3 million to approximately 31.1 million. The percentage of 18- to 24-year-olds enrolled in college also was higher in 2011 (42.0 percent) than in 2000 (35.5 percent). This fall, these traditional college-age students will be joined by around 8.7 million older students ages 25 and over.

The number of Master’s degrees awarded, about 657,000 in 2009, has more than doubled since the 1980s, and the rate of increase has quickened substantially in the last couple of years, says Debra W. Stewart, president of the Council of Graduate Schools. Nearly 2 in 25 people age 25 and over have a master’s, about the same proportion that had a bachelor’s or higher in 1960. “As more and more people get a bachelor’s degree, it becomes more commonplace,” said Linda Serra Hagedorn, past president of the Association for the Study of Higher Education and associate dean and professor at Iowa State University in Ames, Iowa.

But among employers, not all B.S.s are created equal. In many communities around the U.S., having a bachelor’s is not enough to make you stand out. “A bachelor’s is what a high school diploma used to be,” added Caryn McTighe Musil of the American Association of Colleges and Universities in an article published in the Christian Science Monitor, Sun, 17 Jun 2012.

The danger is that growing numbers of Americans will be unnecessarily saddled with hefty student loans and degrees (BS) that don’t guarantee them a high paying job… or even a job, these days. Comparing the percentage of B.S degree holder’s unemployment rate through the years confirms exactly that. The more the market improves, the more pressure is on employers to hire the best candidates. A master’s degree is now what you have to have to get where you want to go. Many entry level jobs today now require a master’s and virtually all senior management and senior professional positions require a master’s.

But even in occupations that do not formally require post-graduate education, some employers have begun using graduate degrees as a filter. “There’s been some slight shifting to hiring more advanced degrees, particularly the master’s – not MBAs, but generic master’s,” says Edwin Koc, director of strategic and foundation research at the National Association of Colleges and Employers. Koc notes that a number of his organization’s members are now hiring people with a master’s in engineering for jobs he’d assumed require only a bachelor’s. So… what gives? These days a bachelor’s degree is practically a prerequisite for getting your résumé read. Two-thirds of employers said they never waive degree requirements, or do so only for particularly outstanding candidates. But clearly the B.S. credential leaves employers wanting. While employers use college as a sorting mechanism to signal out a job candidates’ discipline and drive, some think having “only” a B.S. is falling short in new hires.

The good news is that the college labor market has progressed steadily during the past post-recessionary four years. A more robust market may be just around the corner. The job market will be competitive, and job expansion for most graduates entering the labor market will mitigate the problems students have with finding jobs related to their career aspirations.
[Tweet “Clearly the B.S. credential leaves employers wanting.”]

Take care that you are in the right field. The biggest drag on the market is the drastic reduction in job opportunities at government agencies. Given all that, there is good news. The college labor market has progressed steadily during the past four years. A more robust market may be just around the corner, but it will continue to be extremely competitive.